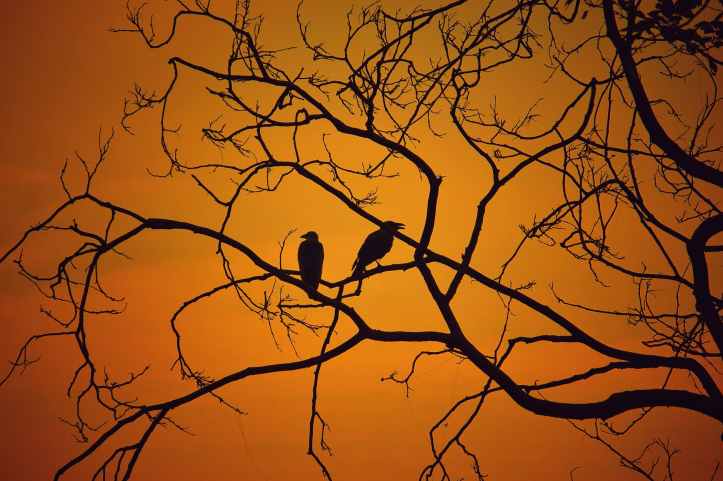 The night sky over the trail that Omeria walked on resembled the perfect spooky shade of pumpkin. The trail from Logoff so far had entailed no other living beings except for two crows and a gang of white rats. The crows seemed to be following her along the path. Her paranoia made her believe that they were mocking and laughing at her along the way. How did she plan on getting into Kobo exactly? She had no more gold left than what Callahan gave her after Mattau killed her brother Jacobi. Did she want to carry the sack of blood gold into her new life? If worst came to worst, if she needed to she could use the blood gold to pay a troll to let her pass. By now, she figured that she was in the clear, the trolls didn’t travel too far past the outer Crescent. The doubtful part of her wanted to turn around and head back to the village of Logoff. But why stay there and live alone in poverty? Upon arriving in Kobo there would be a strong likelihood that Nestor would read her past and know right away that she was the last member of the Abayolla tribe. The tribe that he stole the berry fields from. Nestor would never give her back the berry fields no matter how much she demanded it. Omeria was aware that the theft of the berry fields forty years ago and Nestor’s selling acumen had made Kobo the second richest village in the land.

Yessenia propped herself up against the prayer room building. Nestor all smiles exited out of the front door, he took a few steps, stopped and sharply turned towards Yessenia. “How long you been waiting out here?”

“When is she leaving?” Yessenia inquired. “They don’t have to go back to the Ash village if they don’t want to. But hear me this, they can’t stay here any longer.”

Nestor began to walk to his residence. “Are you hungry? I think you become negatively impassioned when you are hungry.”

She laughed. “Your passions are the problem. Asher is not for you. You see how she has latched on to your werewolf friend Donavo. She finds him to be more interesting than you.”

“Did I tell you that Sarah has created something called a berry pie. Really, it’s nothing more than a big berry tart. We will charge triple for it at the Bristol market. You can accompany her when she goes.”

Yessenia grabbed his arm and whispered in his ear. “I get it. I made your people chain you to a pole. Made you totally dependent on us, so you don’t trust me now. Want to send me off to the market. Not a good idea. Don’t forget that I know all of your secrets Nestor. All of them. I might have too much berry juice while in Bristol and start talking.”

Nestor stood outside of his door, internally brewing about her threat. “I’ve tried to be kind with you even though you betrayed me. You can’t be for Kobo and not for me at the same time. I am your leader. Decide if you want to stay here under my rule or not, Yessenia.”

“You’ve betrayed us. There is no reason for the Ashians to still be here. The protectors said that the vamps and Mercy returned to the Crescent. You will be distracted by Asher like you were by your flame Hettie.”

“If you’ve forgotten I killed Hettie. She is no longer a distraction.”

Yessenia continued to point her finger while speaking and aggressively stood in front of Nestor. “Asher and her people need to go. We have Mattau to deal with, Mercy, Declan Mortis III, Zee, the Punisheres, man-eating fish in the sea and there’s allegedly a small black cat running around here. You don’t have the time to chase after her!”

Nestor let his wall down. “Don’t yell at me! I didn’t chain you up.” He looked around to see if anyone was watching. “You know, I wish you had faith in me, like when we were young. You were always on my team. You, me, Josephus, Montez, Kaytee and Lis.”

“When you were by my side. We’d always win.”

“You’d always cheat. You must have learned how to deceive from your time with the witches and vamps. Come here.” She gave Nestor a heartfelt hug. “Do what needs to be done, my leader.”

During last meal in the great hall, Asher thanked the Koboians for their great hospitality. She was still wearing the same berry stained gown that Nestor had damaged. Now the gown had rips in it from when she was attacked by the alleged black cat. When she spoke she looked directly at Magnus, Kobo’s new goldkeeper. In Asher’s mind their debt for her gown was no longer reasonable. Magnus was proud to be able to write down multiple zeros in his ledger under the heading of Ash village gown accident. Asher said goodbye to Donavo outside of Kobo’s gate. She knew that a long distance romance with a werewolf would never work. She was deeply in love with her people, her heritage and the plant life. Asher belonged in the Ash village and shortly Donavo would return to the woods of the Crescent to be with his pack. 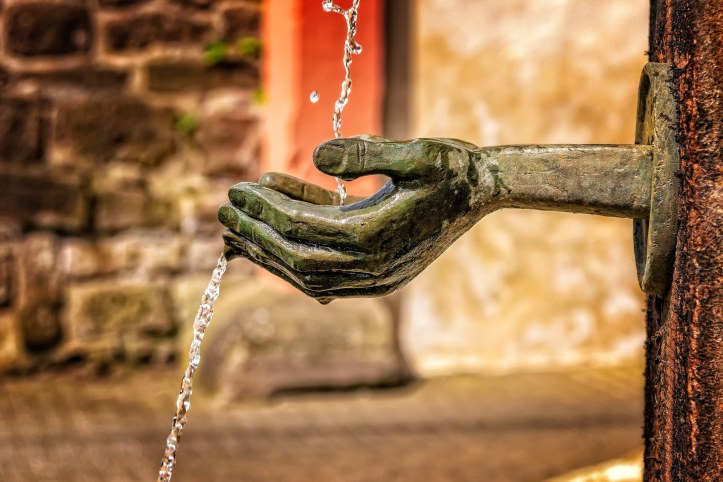 The freakish arm of Ash tree was dropped back off in Ash. Sam, Kobo’s chief builder was careless with the tree. He purposely chipped the wood with his shovel and fussed under his breath. “Good riddance to this piece of witchcraft.”

As the Ashians were leaving through Kobo’s open gate, Omeria off of the Octo Trail pulled up her dirty hood and casually snuck into the crowd. “Oh, I forgot something in the hall!” Omeria entered Kobo. She ran past Yessenia, Nestor and Donavo and quickly entered the prayer room. If she had to she could easily hurt someone with her sharp stick to buy her some time. Later on that night, Jayson, Kobo’s newest protector, sat down at the table in the prayer room. He felt that it would be wise to pray since he was replacing Oberlyn, who was recently eaten by a fish. He hoped that he wouldn’t suffer a similar fate in his new position. Shortly after he began to ask for favor, he heard the sound of snoring. “That’s odd.” He glanced around the room from his chair. The sound led him to a corner of the room that had been out of his line of sight. Omeria was tired after her long journey. Strangely, she was comfortable sitting on the hard floor. She was covered by a large cloth. Jayson assumed that it was one of the orphaned children who felt badly about the man-eating fish situation. He quickly removed the cloth. “Not the best way to hide.” He laughed until he realized that he didn’t recognize the woman at all. Her gown was dirty and too big for her. Next to her was a small sack full of gold. He would take the sack to Magnus so that the gold could be counted and locked up.  He didn’t want to wake her or leave her in the prayer room alone. For all he knew she could be the witch Mercy or the human form of the alleged black cat. He decided to carry the sleeping Omeria straight to Nestor’s residence. Nestor would know who she was.

“I don’t know who this is,” Nestor chuckled.

“This is humorous to you?” Grant asked. “No one can get through the gate, unless they are a freak. She probably flew in.”

Jayson using rope began tying her to a chair. “Checked her teeth. She’s not a vamp.”

Donavo sniffed her for a few moments.  “She’s not a witch and she doesn’t smell like berries either. She must come from a poorer village like Logoff, Sandor or Flaco.”

Teffani another Kobo protector chimed in. “If she were from Sandor her gown would be lighter due to the heat there.”

Rayden yawned. “Who cares where she is from? What do we do when she wakes up?”

Nestor smiled at his people who were standing around Omeria in a circular formation. “It matters where beings are from a great deal. She went through a lot of trouble to get here. Kobo must be important to her. I will read her past. If it’s clear then perhaps she can stay.”

Teffani noted, “Are you sure about this? The last time you had a bad vision, you ended up in a deep sleep and chained up.”

“I need everyone to be silent.” Nestor placed his right hand on her forehead. Her skin emitted the temperature of a human. Nestor’s eyes rolled around in his sockets. He saw the golden armed Mattau being let into Logoff’s gate by someone who appeared to be the lackadaisical leader Callahan. Omeria’s brother was killed and a young girl was dragged off to become the next Glodean, the girl dipped in gold. Omeria, in his visions mentioned the Abayolla tribe several times.

The next morning Omeria was invited to sit next to Nestor in the dining hall. She bathed in a bucket, squirted herself with berries and was given a decent gown to wear. Teffani properly introduced Omeria to Nestor during first meal. “She awakens. Sit here. He has questions for you.”

Nestor wanted her to feel uncomfortable so he ignored Omeria. He loved talking to his Grant, Donavo and Kobo protector Rayden about his wild times in the Crescent. He liked to brag about his bravery in front of the newcomers.”

Donavo teased him. “Yes, you are so brave that my sister had to rescue you from a snake pit.”

Rayden threw three berries at Donavo’s face. “Nestor’s the bravest leader in all of the land. But I guess, it’s easy to be brave when you run around with beasts.”

“Hey, don’t throw the berries. It’s a waste of gold,” Nestor scolded them.

“Beasts? Rayden is too foolish for my company.” Donavo left to pester Yessenia and Sarah, the new berry tart maker.

Rayden left to take his daytime nap while Grant left to visit the prayer room after eating.

Omeria quickly realized that though Kobo functioned well, it was lead by the biggest fools that she had ever met. She stood up to leave. “I’ve made a mistake in coming here, Nestor.”

“No mistake, sit down.” Nestor patted her seat.

“It’s very rude to ignore a guest,” Omeria smoothed out her gown with her hands after she sat back down.

“It’s extremely rude to sneak into a village. But you are so clever. We could use your cleverness.”

“Nestor, where is the gold that I came here with?”

“No worries. Our goldkeeper is holding on to it for you. Now I read your past yesterday, it was very enlightening. You wish to stay here and have access to the berry fields. Your dead brother told you to come here and try to seduce me.”

She clapped her hands twice. “Wow. You really are a liar. He never used the word seduce ever.”

“But that’s what he meant. Steal my trust just like I stole the berry fields from your tribe. I get it.”

“So you admit it then? The berry fields don’t belong to Kobo.”

Nestor leaned in towards her. “I suggest that if you want to stay here, you play along. The truth will not make you rich. I’m going to keep a close eye on you. Teffani will give you some work to do and a place to stay.” He patted her on the head as though she was a domesticated beast. “You are a cute one. Don’t mess up this chance.”